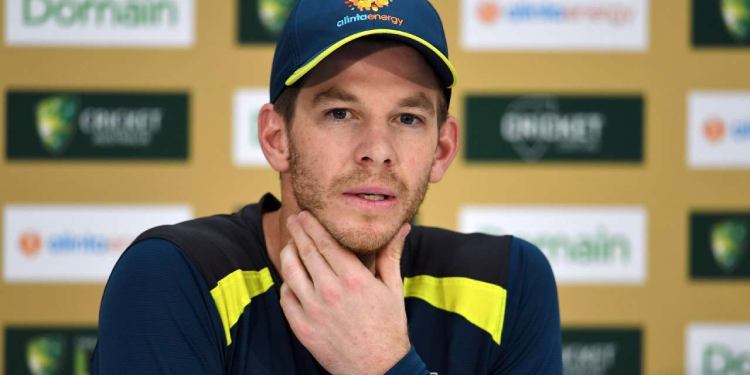 Former captain of the Australian national Test team, Timothy David Paine is a former Australian international cricketer. He’s a right-handed batsman, bowler and wicketkeeper who used to play for the Tasmanian Tigers in Australian domestic cricket.  Before his selection for Australia, Paine was the Captain of the Hobart Hurricanes.

Fans nicknamed him ‘the Kid’ because of his baby-face/baby-like appearance. He has played in all the game formats for the Australian Team.

Timothy David Paine was born on December 8, 1984, in Hobart, Tasmania. His father’s name is John Paine. His family consisted of him and his 3 other siblings. His uncle, Robert Shaw, was a coach and an AFL player.

Paine went to Lauderdale Primary, Rokeby High and Rosny College. The 36-year-old holds Australian citizenship. At the age of 15, Paine captained Tasmania at Under-15 and Under-17 levels, along with being a member of its Under-19 team.

Tim Paine received a rookie contract with Tasmania at the age of 16, which made him the youngest-ever contracted player in Australia. In 2005, Paine landed the opportunity of playing in the match as a replacement for Brad Haddin. This got him the opportunity of making his official debut.

Paine joined Indian Premier League’s Sahara Pune Warriors for $270,000 in 2011. Paine has played 35 tests, 35 ODI, 12 T20 and 2 IPL matches. Even after being the vice-captain of Australia’s Twenty20 team, he played his last T20I game for Australia on January 11, 2011. Just as his international career was taking off, he suffered a horrific finger injury. Paine finally returned to Tasmania after missing out on almost two full seasons due to his injury.

At the start of 2017, Paine was considering his retirement. He was considering taking on a job with Kookaburra as a sponsorship representative however Adam Griffith – also a former cricket player, successfully talked him out of it. Paine got international recalls for the first 2 Ashes Tests. During the Ashes series, he scored 192 runs in six winnings.

During the 2018 series, Paine became the 46th Captain of the Australian Test team. In May 2018, Paine became the captain for the Series in England but Aaron Finch replaced him after Australia’s defeat 5-0. Paine again captained Australia during a Test series against Pakistan but lost the series 1-0 in October 2018. Again, Paine captained for the matchup against India. Despite being on home soil, the team lost in a four-match test 2-1.

You may want to know Sikandar Raza Butt

In January and February 2019, against Sri Lanka, Paine captained Australia and won the series 2-0. In July 2019, Paine was the captain yet again for the 2019 Ashes series in England. In the match against England, after winning the fourth test with England levelling the series in the final test 2-2, Australia retained the Ashes. This resulted in the first drawn Ashes series since 1972. Paine became the first Australian to achieve the feat in 21 years.

On November 19, 2021, Paine stood down from the captaincy due to a ‘sexting’ scandal. Due to this, Paine’s wife fled to a holiday with a friend. Bonnie left for a little breather leaving the kids at home with Paine. She shared a snap of herself reading a seminal feminist book. Eventually, they talked and decided to move on with life.

Even after the incident with Paine’s coworker, Bonnie says she has forgiven Paine for the indecent messages. She even felt like the whole incident helped with their marriage and was happy with how Paine was honest and transparent about the whole incident.

You may want to know Hardik Pandya

The Australian Cricketer Tim Paine married Bonnie Maggs in 2016. The couple has been together since. The couple has three children, his daughter Milla, his son Charlie and Wilson. The couple is quite open about their relationship status.

According to livesportsworld.com, Tim Paine’s net worth stands at approximately $6 million (Indian estimated). Though he earns his bread from playing cricket, he also gets extra from his domestic team Tasmania Tigers and BBL team Hobart hurricanes.

Tim Paine doesn’t have an Instagram account but he does have a Twitter account. He uses it but not regularly. His wife on the other hand is quite active on socials. Recently, Bonnie posted a picture of her and her son. Not as active on socials as his wife, he still has a significant fan following of 175.5k followers on Twitter with some monthly retweets.