William Eklund is a Swedish ice hockey player who currently plays for the Swedish Hockey League’s Djurgrdens IF.  William Eklund is your man if you’re seeking an attacking juggernaut with an outstanding play-making vision.

After advancing through the Djugardens development system and joining their Swedish Hockey League club this past year as an 18-year-old, the Swedish NHL prospect is listed as the top International skater for the 2021 Draft. William Eklund was voted Rookie of the Year in the SHL after scoring 23 points in 40 games against men. Three of his eleven goals were game-winners, and he added two more on the power play.

And, of course, having William Eklund on your squad, or at the very least in your system, would be ‘okay with everyone. William Eklund has a 200-foot game, a great shot, and an enviable sense of imagination. As he develops, Eklund will most likely be a part of a team’s top-six forward group in the future.

William Eklund, a resident of Haninge, Sweden, was born on October 12, 2002. His zodiac sign is Libra. William Eklund is the son of former ice hockey player, Christian Eklund, who played 429 Elitserien games as a left-winger for Djurgardens IF. Other information about his early life has not been revealed yet.

William Eklund made his Swedish Hockey League debut on January 4, 2020, for Djurgrdens IF in a 4–2 victory over IK Oskarshamn. During the remainder of the 2019–20 SHL season, he appeared in 20 regular-season games, accumulating two points. In the first eight games of the 2020–21 SHL season, he has five points. NHL Central Scouting ranked him as the top foreign prospect for the 2021 NHL Entry Draft, and the San Jose Sharks selected him seventh overall.

William Eklund has been nominated to Sweden’s preliminary team for the World Junior Ice Hockey Championships in 2021. However, he tested positive for COVID-19, which prevented him from making the tournament’s final roster.

On April 28, 2021, Eklund made his Swedish national ice hockey team debut in a friendly game against Denmark. He had scored one goal and one assist in his career.

Eklund’s first season in the SHL was the fifth-most productive in the league’s history for a player entering the NHL Draft for the first time. He accomplished this while losing time due to a positive Covid-19 test and another three weeks due to an appendectomy in January.

NHL Central Scouting presented Eklund with the E.J. McGuire Award. The prize is granted to the candidate who demonstrates a commitment to greatness by character strength, competition, and athleticism. Former NHL forward Michael Holmqvist presented the trophy to the 18-year-old Swede at his home in Sweden.

William Eklund belongs to the category of skilled point producers who are concerned about their off-the-ice performance. Eklund is an enthralling player who epitomizes clutch performance, timing, and vitality. 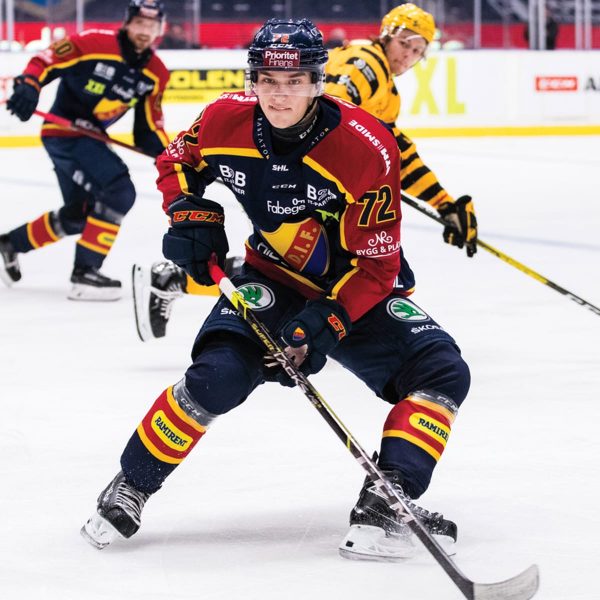 Eklund has a keen hockey intellect. For a teenager, his anticipation and awareness are at an all-time high. As a result, the majority of his better scoring opportunities come from beating an opponent to a position or exploiting a space as it arises. Under pressure, Eklund’s passes are near-perfectly timed, and he appears to consider the pace of an oncoming opponent when selecting whether to release the trigger on a dump-in, lead pass, or high flip.

Matilda Viktoria Rehnberg is William Eklund’s girlfriend. Even though the ice hockey defenseman isn’t very active on Instagram, he has uploaded a photo of his girlfriend there to let the world know that he has met the love of his life. Matilda, who is a model, often posts about her boyfriend on Instagram. It appears that the couple married in 2021.

William Eklund has been playing for Djurgardens IF in the Swedish Hockey League since 2020, and his monthly pay is estimated to be at least $20,000. In addition, he is paid to represent his country in numerous international games.

According to NHL Central Scouting, he is also the top foreign prospect for the 2021 NHL Entry Draft. William Eklund will make millions of dollars if he is selected by any NHL team. According to reports, the NHL’s minimum payment is $700,000.

William Eklund’s net worth is still unknown as of 2021.

For full biography about your favorite NHL, please check out Sportscovering.