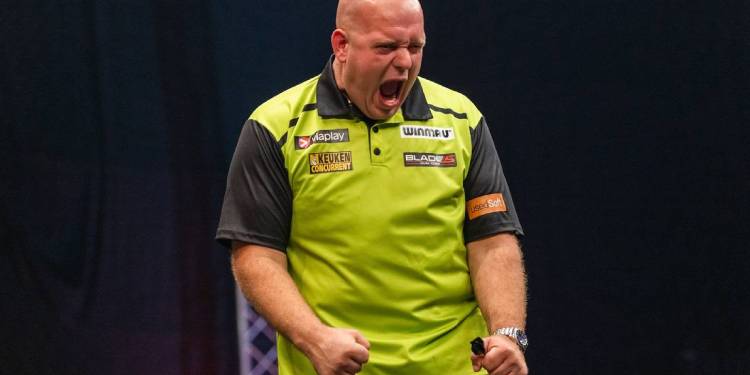 Michael van Gerwen is a professional dutch dart player who is ranked as number 3 in the world. He is a dominating dart player who has beaten various other top players and secured his position. If you are a dart lover and dreaming about becoming a player one day then you should definitely take Michel as an inspiration.

Gerwen has won 3 times world series finals, 5 times World Grand Prix, 6 times Player ch’ship, 3 times World Ch’ship, 2 times World Matchplay, and other various international tournaments and events. All of his success is achieved from his hard work and dedication to his play.

Michael van Gerwen was born on April 25, 1989, in Boxtel, Netherlands but his original hometown was in Vlijmen, Netherlands. His friends and some of the family member calls him by his nickname “MVG”.

Besides, Michael started playing darting in 2002 when he was just 13 years old. But before that, he was a football player who plays as a defender in the game.

In just one year, Gerwen learned so much about darting and also participates in the Primus Masters Youth event. In addition to that, he has also won several international and national tournaments and events.

Michael van Gerwen started his senior-level career in 2007 in the Bavaria World Darts Trophy. He reached the 3rd position on BDO/WDF World Rankings at that time which is quite an excellent performance. Following the same year, he is the winner of Winmau World Masters by defeating Martian Adams by a 7-5 score.

Gerwen’s major dart achievement was in the PDC Major Finals. During the event on the 2012 World Grand Prix, he wins against Mervyn King by scoring 6-4. After that win, he again participates in the 2013 Premier League and wins the title with a score of 10-8.

In 2018 during the PDC major finals, Gerwen was the winner of the Premier League championships and World Grand Prix championships. Similarly, in 2019, he again knockout Michael Smith in World Championships with a score of 7-3.

Currently, in 2021, he competed in PDC World Darts Championships and wins against Ryan Murray by 3-1.

Michael van Gerwen is happily married to his wife Daphne Govers back in 2014 who is his longtime girlfriend. The couples now have 2 children (Mike Van Gerwen and Zoe Van Gerwen).

Michael van Gerwen is a successful and dominant dart player in the world. His net worth is estimated around at $6 million according to various internal sources.

Besides, he also earns through his merch items such as Darts, Dart Flights, and Autographed Photo.

Michael van Gerwen also has a personal website called “michaelvangerwen.com” on where you can see all his Tournaments & Games which he had won.

For full biography about your favorite dart player, please check out Sportscovering.