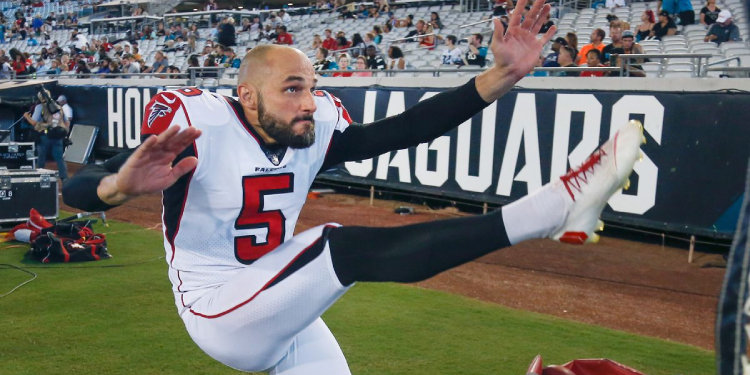 Matt Bosher is a former American Footballer who was awarded as 2x times First-team All-ACC, second-team ALL-ACC, and PFWA All-Rookie Team. He plays as a punter during his game for his college football team as well as for Atlanta Falcons.

He is the most dedicated and dominating player in the game by overcoming his opponent in order to win a game. Bosher first plays for his college team until 2010 and was later selected for the 2011 NFL draft by the Falcons. All of his skills and hard work make him a successful and recognized player in the world.

Matt Bosher was born on October 8, 1987, in Greenacres, Florida. Most of the people and his family members called him by his full name “Matthew Bosher”. He is 6ft 0 in tall in height and weight around 208 lb (94kg).

When Bosher was young or an early age, he loves watching football and also dreamt about playing one in the future.

Besides, Bosher went to Jupiter High school in Jupiter, Florida. At that time, he used to play for his high school and manages to bring tons of wins. Following that, he started recognized as the top placekickers in the whole country by scout.com because of his excellent play in the game.

In addition, Bosher was also known as the 3rd best kicker in his college and country which is ranked by ESPN and 6th by Rivals.com.

Matt Bosher started his main football career from his college back in 2007. He used to play football for the University of Miami for 3 years. Bosher appears in the 2007 season game where he punted a whole season 10 times for 408 yards in the second game which is against Oklahoma. His overall journey on the season was excellent and manages to earn rewards.

Later in the 2008 season, Bosher joins the game as a placekicker and punter. He played the game against Charleston Southern, Duke, Central Florida, NC State, and Florida State throughout the whole season.

A year later in 2009, he again plays for his college against Virginia, Clemson, Wake Forest, Florida A&M, and North Carolina. His performance was good throughout the whole season.

After an excellent year, Bosher started to play as a senior for the University of Miami in the 2010 season. At that time, he plays against Clemson, Virginia, Notre Dame throughout the season. He gained spectacular fame and rewards during his play for the college.

Bosher first started his professional career in the 2011 season after being picked up by Atlanta Falcons. It was the rookie year for Bosher to be able to participate in such a big team. He wins the match against Chicago Bears, Indianapolis Colts, Carolina Panthers, and Jacksonville Jaguars. But lost the game against New York Giants in Wild Card Round.

In the year 2012, Bosher played against NFC South, Tampa Bay, Seattle Seahawks, and San Francisco 49ers. He manages to win all the games against his opponent and bring the trophy home.

Besides, Bosher again joined the season from 2013 till 2017 and fought against tons of opponents. During his gameplay, he won several matches and also loses a few. But he plays fair and with his full potential for falcons.

For the 2019 season, Bosher was injured and couldn’t attend the game. He later again wanted to participate but his injury wasn’t not healed properly. So, he becomes a free agent in March 2020.

Matt Bosher is happily married to his wife Brittany Bosher back in 2015. The couple now has two beautiful kids Mathew Carl Bosher and Sebastian Bradley Bosher.

Matt Bosher is a successful professional football player who has gained tons of fortune during his football career. So, his net worth is estimated around at $2.5 million according to various internal sources.

Besides, he also earns a good amount from his merch Football Card and Atlanta Falcon’s Hoodie.

Matt Bosher is also quite active on his social media accounts. He has over 27k followers on his Instagram account.