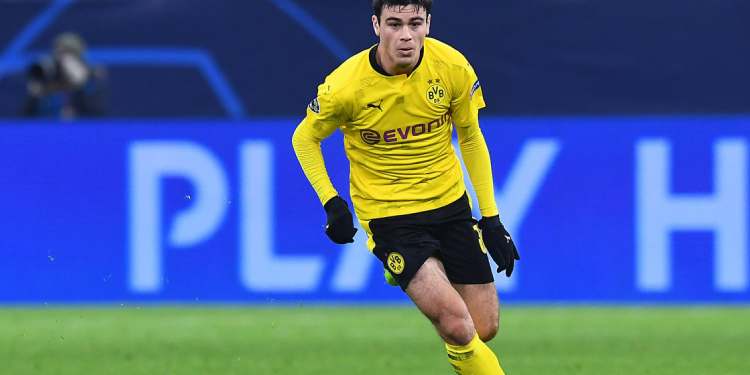 There is a young American soccer player who has gained quite popularity because of his playing skills and style at such a young age. He is considered as the “Next Generation” player who will become one of the best players in the future. Yes, I’m talking about Gio Reyna, an 18 years old soccer player.

He plays as an attacking midfielder during the game with his current team Borussia Dortmund. The player has a technique that can lead his whole team to win each and every game. This is why a young blood Reyna always manages to win the heart of his club.

Gio Reyna was born on November 13, 2002, in Sunderland, England. His full name is Giovanni Alejandro Reyna which is a kind of long name so his friend and other family members call him “Gio”.

Besides, Gio Reyna is the son of Claudio Reyna who is a retired soccer player of Rangers, Manchester City, Sunderland, Unites States, and New York Red Bulls. His mother Danielle Egan also a retired member of the United States Women’s national soccer team.

Reyna grew up with his one elder brother Jack Reyna and the other two younger siblings names Joah Reyna (Brother) and Carolina Reyna (Sister). The whole four siblings stay together in the Sunderland whole in childhood because his father plays for the Sunderland team.

However, Reyna later has to move back to the United States at a young age when he was 5 because his father signed a contract with New York Red Bulls. So, he spends most of his teenage time with his father along with other family and also improves his soccer skills.

Giovanni Reyna started his career when he moved to Bedford, New York back in 2007. At that time, he joined the New York City FC which was his hometown academy team. Reyna played for the FC team till 2019 and afterward moved back to Germany on where he joined his professional club Borussia Dortmund.

The Borussia club was the first international team where he played against the FC Augsburg in starting of 2020 and wins the match with a 5-3 score. It was a huge moment for Reyna to win such a game of his lifetime. Therefore, he was titled as the youngest American player to appear in Bundesliga.

A month later, Reyna again fought the match against Werder Bremen in German Cup and manages to hit a goal in the match and wins with a 3-2 score. It was his second professional match that went quite successful and again earns the title “Youngest goal scorer in the German Cup History”.

The year was just the beginning for Reyna as he again competed in UEFA Champions League and plays the game against Paris Saint-Germain and wins the game with his spectacular goal.

Likewise, on May 23, Reyna play against the VfL Wolfburg and achieve a victory with a score of 2-0 in the final 11 minutes. Following on September 14, he wins the game against MSV Duisburg in a free kick by scoring 5-0. Furthermore, a week later, Reyna again fought the match against Borussia Monchengladbach and manages to win the game with a score of 3-0. It was the time when Reyna become the second youngest best soccer player behind Christian Pulisic in Bundesliga.

In December 2020, Reyna play against Eintracht Frankfurt and score the goal for Bundesliga. By that goal, he becomes the second youngest person to ever score a goal twice in the major European league. At the end of December, Reyna was recognized as U.S soccer’s young Male player of the year 2020.

From March 2021 till June 2021, Reyna was found against three opponents (Northern Ireland, Mexico, and Costa Rica) and he manages to win the game every time.

Gio Reyna is currently not in any relationship or dating someone. So we assume he is single and only focusing on his football career.

Gio Reyna is a successful youngest football player in the world. His net worth is estimated around at $500,000.

Gio Reyna is also active on his social media account. He has over 461k followers on his Instagram account. You can see pictures of him mostly playing in the game or practicing while wearing his jersey.