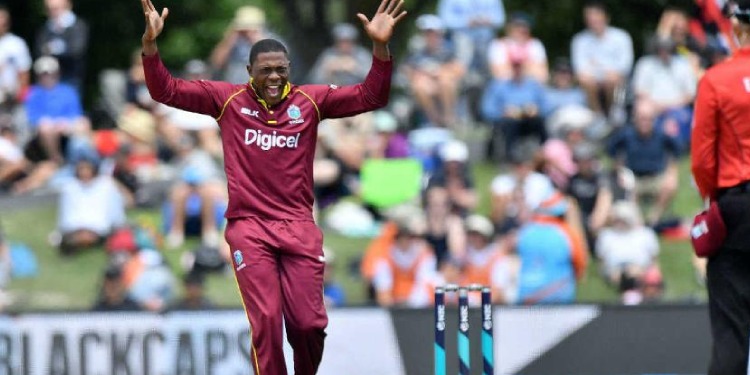 Keemo Mandela Angus Paul, known as Keemo Paul, is a Guyanese cricketer who plays for the West Indies. Paul is a right-handed batsman and right-arm fast-medium bowler trained under Ricky Pointing, a former Australian Cricketer. The West Indies named Paul the T20 Player of the Year in the mid of 2019.

Born on 21 February 1998, Keemo Paul hails from Guyana, South America. His father’s name is David Paul, and his mother’s name is Rita Paul. Paul grew up with four siblings – an elder brother David Jr and two elder sisters, Keon and Candy Paul. Paul is the youngest in his family and holds Guyanese nationality. Stand 5 ft. 9 inches.

Paul attended Essequibo Islands Secondary School. He played for the U-15 National cricket team while in school. So starting cricket from early years paid off.

Keemo Paul started his domestic career with his List A debut on 16 January 2015. He played in the 2014–15 Regional Super50 tournament. The West Indies named Paul for the 2016 Under-19 Cricket World Cup at the end of the 2015 season. Paul managed a batsman in the last over of the match, resulting in some controversies. The game concluded with the West Indies claiming the win. The West Indies qualified for the quarter-finals placing 2nd in their group. Paul claimed seven wickets for himself, including two from India and more than 40 with the bat. The tournament concluded with the West Indies taking the win.

You may also want to know about Hardik Pandya.

On 18 March 2017, Paul made his first-class debut for Guyana. A few months later made his T20 debut for Guyana Amazon Warriors. In the 2017–18 Regional Four Day Competition, he scored his maiden century in first-class cricket against Jamaica. The annual Cricket West Indies’ Awards named Paul the Emerging Cricketer of the Year in June 2018.

Paul’s family often had to move from one location to another. His family fully supported him so that Paul could focus on his game and get the best training and facilities. Paul, with his family, moved from Saxacalli to Wakenaam and then Cornelia Ida to get better training facilities. This shows his family’s support for him.

Later in December, before the Delhi Capitals bought him for the 2019 IPL, Paul took his first five-wicket haul in T20Is in his third and final T20 against Bangladesh. The following year, Paul was named one of ten reserve players in the West Indies squad for the 2019 Cricket World Cup. The Montreal Tigers picked Paul to play in the 2019 Global T20 Canada tournament in June 2019. In July, the Guyana Amazon Warriors named Paul for the 2020 Caribbean Premier League. His career has just started to expect him in many upcoming matches.

Keemo Paul is not active on socials. Paul has an Instagram account. However, he hasn’t posted even once. Even with accumulating 15.6k followers and being verified, he has not given much thought to his social media life as he focuses on his career as a cricketer.

You may also want to know about Rishabh Pant.

Keemo Paul is a very successful cricketer. The 23 years old Cricketer began his career with his best performance. According to playerswiki.com, pauls net worth is $1 million approximately as of 2021.

For more biography about your favorite Cricketer, please check out Sportscovering.